Why Microsoft Locks you in with Active Directory 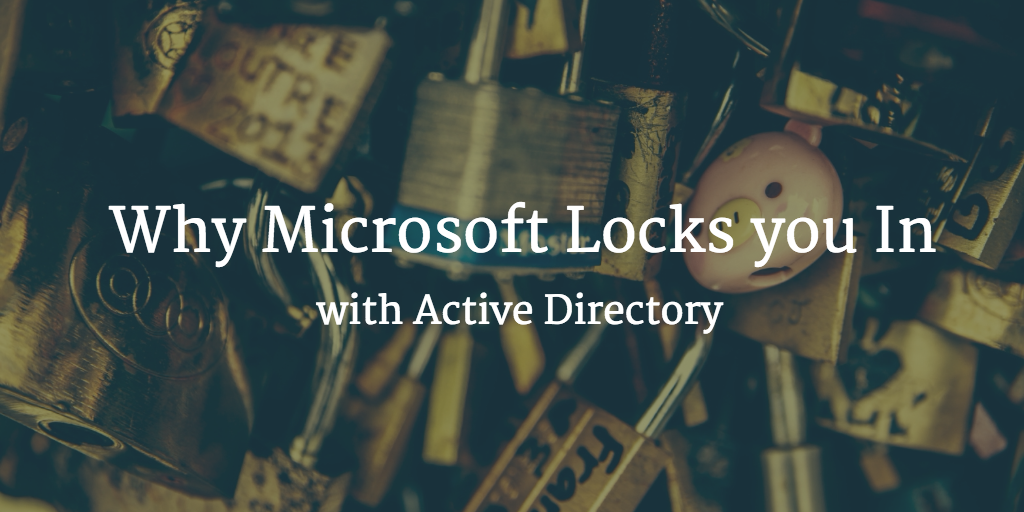 In 2015, Microsoft is in a more competitive environment than ever before. The last fifteen years of the Internet and web have changed market dynamics. In many ways, Microsoft was slow to react, but in others they have been highly successful. In fact, Microsoft still behaves like a monopoly in many markets.

One area that is rarely spoken about is Active Directory’s dominance in directory services. Microsoft’s introduction of Active Directory in 1999 was a shrewd move. Coupled with Microsoft Exchange (their email server), they effectively dominated the backend infrastructure of every company on the planet.

If you wanted email, you needed Exchange. And, if you had Windows machines, to manage them, you needed Active Directory. So, IT organizations would just buy both and be done with it. That’s how AD and Exchange became the infrastructure of choice for virtually every organization.

From Back to Front

Because the backend infrastructure was Microsoft, that enabled them to dictate what organizations would use on the front-end. IT admins were left with little choice:

It worked. Microsoft essentially built rigidity into their system so that it would make sense for an organization to be Microsoft, through and through.

Exchange: A Crack in the Armor

The only problem with building rigidity into your system is that it discourages innovation. By 2004 Microsoft’s Exchange software was behind the curve.

Google recognized this and saw the opportunity to deliver a better web-based email client. As a follower to Microsoft’s Hotmail, Gmail became the consumer email system of choice.

Is Active Directory Next?

Google showed that Microsoft’s monopoly was vulnerable. They could have kept going, offering a directory service to compete with Active Directory. But they stopped at Exchange and so Microsoft’s market dominance with AD continued.

But a couple big trends have weakened Active Directory’s position in the market.

More and more organizations are saying that they don’t want to be restricted to Microsoft solutions. Unfortunately, until recently, Active Directory was effectively the only game in town.

Microsoft likes it that way. In fact, some have said that AD is perhaps the most critical piece of software that Microsoft makes because it makes their customers “locked in” to Windows. But no longer does Microsoft have that power with changing business trends.

At Last, a Cloud-Based Directory Service

Organizations now have an AD alternative, with the introduction of Directory-as-a-Service (DaaS).

DaaS is a cloud-based directory service that connects users to devices, applications, and networks virtually. DaaS works regardless of operating system, so it enables IT to leverage whatever types of IT resources they need (not just those that are Microsoft). Compared to Microsoft AD, DaaS is way ahead of the curve.

Microsoft Exchange was supplanted by the better, more versatile Gmail. Now Directory-as-a-Service solutions are replacing the need for Active Directory. And, they are integrating seamlessly into Google Apps for a fully cloud-based core infrastructure.

Don’t Get Locked in to Microsoft Active Directory

If you would like to learn more how to avoid the Microsoft Active Directory lock in, drop us a note or give Directory-as-a-Service a try.