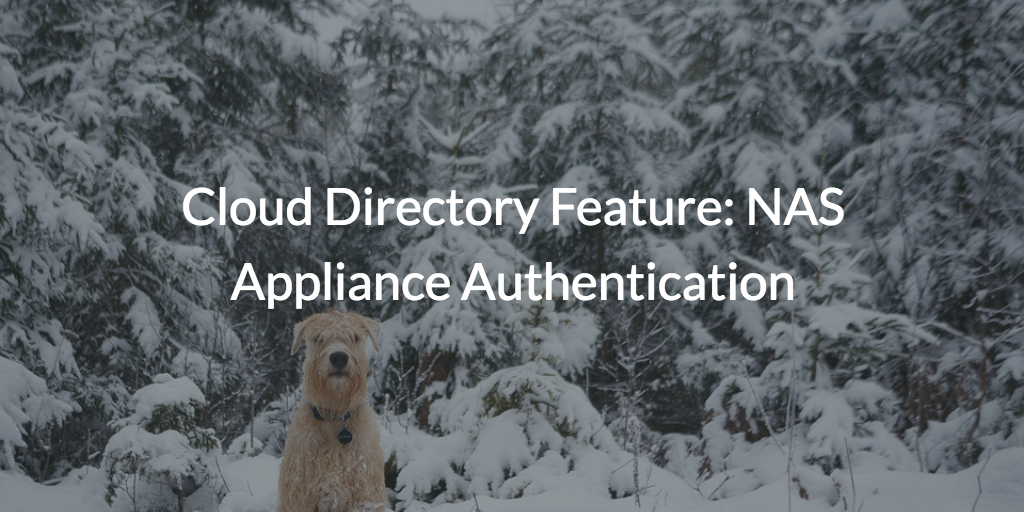 The cloud directory is a hot new area of identity and access management (IAM). In the past, everyone in this space was interested in rebranding their solution as an IDaaS (Identity-as-a-Service) solution. Now, though, it seems that the term cloud directory is the new marketing term. Regardless of the naming conventions companies want to use, a cloud directory is not a term that can just be applied to any product. To be a cloud directory, your product really needs to center around being an identity provider. So, what exactly does an identity provider (IdP) in the cloud need to do? There is a long list of functionality on this list, but the one we will be discussing in this post is the cloud directory feature: NAS appliance authentication. To understand why, let’s begin with an examination of traditional IdPs in regards to network attached storage.

Traditionally, Microsoft® Active Directory® (AD) has been the identity provider in most IT organizations. AD was released in 1999, at a time when the vast majority of IT resources were on-prem and revolved around the Windows® operating system (OS). Desktops, laptops, and servers, for example, were based on the Windows OS, and most applications were built to work on top of the core productivity suite, Microsoft Office®. Even the network and file servers were Windows-based. As a result, IT admins didn’t really worry about connecting users to their file storage systems because, to a large degree, it was automatic.

In fact, storage and file servers have never really been a hot topic in the identity management world. This is largely because IT organizations have been focused on solving core problems such as managing access to web applications via single sign-on (SSO), federating user identities to AWS®, and administering Mac® and Linux® users and systems, to name a few examples. There are plenty of newer challenges as well. Windows systems are being replaced by Mac and Linux, G Suite™ has put a dent in the Office 365™ monopoly, and file servers are no longer only based on Windows. Not surprisingly, alternative NAS appliances and Samba file servers are quite popular.

All of these changes in the IT landscape put a tremendous amount of pressure on Active Directory, which is why a next-generation IAM solution is being delivered to the market. Many are calling this solution a cloud directory or cloud identity management platform. As mentioned, there are some companies throwing this term around without fully realizing the depth of the term. The challenge with many of these solutions is that they are actually a piece of a cloud directory service, rather than a full alternative to AD or a replacement to Azure® AD. Fortunately, one cloud identity management solution has recently emerged that not only includes the cloud directory feature for NAS appliance authentication, but also acts as a complete cloud IdP that is helping IT organizations leave AD.

JumpCloud® Directory-as-a-Service® is a next-generation cloud directory that securely manages and connects users their systems, applications, files, and networks. This includes NAS appliance authentication, which enables IT to administer user access to their files from the cloud. In fact, IT can administer virtually any IT resource from the cloud with JumpCloud Directory-as-a-Service – regardless of the platform, provider, protocol, or whether they are on-prem or cloud-based. JumpCloud can even empower IT admins with the option to eliminate their entire on-prem identity management infrastructure in favor of a comprehensive cloud directory alternative. In doing so, IT is free to choose the best IT resources for their organization.

Watch our whiteboard presentation to gain a deeper understanding of the JumpCloud LDAP authentication to Samba File Servers and NAS appliances. Contact JumpCloud to learn more about the cloud directory feature: NAS appliance authentication. We are happy to answer any questions or schedule a demonstration of the feature in action. You can also sign up for a free account and explore the full functionality of our platform at no cost, and your first 10 users are free forever!