Why Google IAM is Afraid of AD 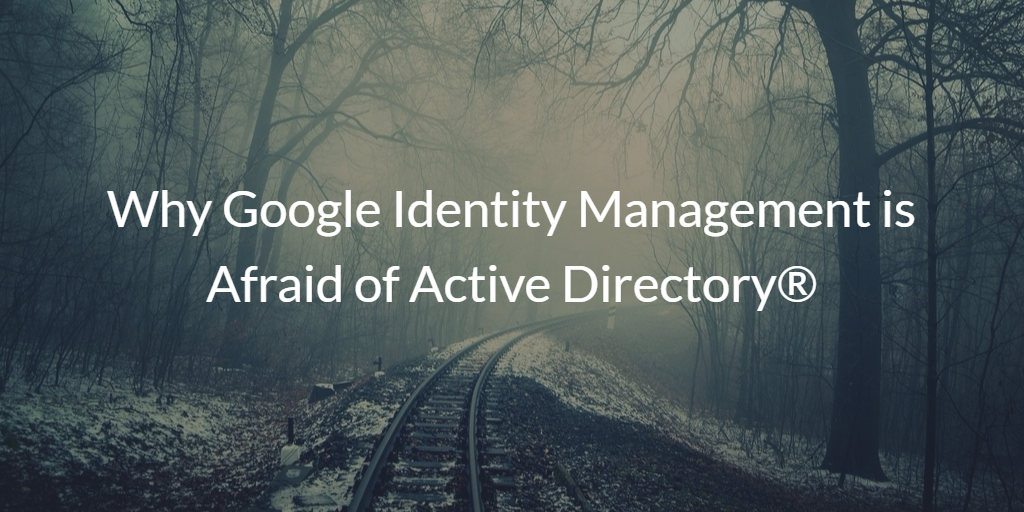 Google hasn’t been afraid to put its head into the lion’s den. They have battled with Microsoft in many online areas, and they’re winning big with search. Google is competing heavily with AWS for cloud supremacy as well. In the area of back-office IT systems, Google’s G Suite and now their Identity Management Service are competing with Microsoft Office 365 and Active Directory®.

Despite their overtures, the truth is that Google is afraid of Active Directory. And they should be.

The Staying Power of Active Directory

Google isn’t equipped to take out Active Directory. Microsoft believes that AD is perhaps their most important product. It is the glue that binds all of their major products together, including Windows, Office, SharePoint, and many IT management solutions. With over 95% market share in the enterprise, Active Directory likely has more market share than any other Microsoft solution on the market.

It’s been an impressive run for AD over the last nearly two decades.

But Google is a Persistent Opponent

Google Identity Management is trying to be a direct competitor to Active Directory, but unfortunately, it’s not there. As a cloud directory service, it is highly focused on Google’s cloud infrastructure. It is seamlessly integrated with G Suite and Google Cloud. But trying to get it to work with AWS, Azure, or other cloud service providers is going to be a challenge. On-prem systems and applications are out of luck.

Google’s view of the world is all cloud. They’ve extended that view to their directory services approach as well.

Challenges of an All-Cloud Strategy

For IT admins, though, the all-cloud approach doesn’t work. They are chartered with managing both on-prem and cloud infrastructure. A half directory services solution doesn’t help them. The same could be said for Active Directory, which is more focused on the internal network and Windows systems and applications. However, IT admins already have AD deployed and have been working with it for years. In enterprise situations, where Google is focused, it is unlikely that Google’s Identity Management approach will make an impact and replace AD. Google knows this and understands that they have a problem.

Google’s goal is to sell a great deal more of G Suite. Office 365 is a stiff competitor, though, and has largely beaten back their attempt to take more market share. By introducing more management tools around G Suite and Google Cloud, the idea is that IT organizations will be more likely able to leverage their core cloud platforms. Instead of making money on their identity provider, the goal is to profit from the other cloud infrastructure items. This is just like the Microsoft model.

There’s a problem, though: G Suite’s directory service doesn’t address core issues that IT admins face with their on-prem and multi-provider cloud platforms.

For organizations that are leveraging G Suite or Google Cloud, there is an alternative to AD that doesn’t involve having two directory services solutions. Directory-as-a-Service® is tightly integrated with G Suite and Google Cloud as well as other major IT service providers, for example, AWS, Azure, and Office 365, among others. It is an independent cloud directory service for hybrid infrastructures, including on-prem Windows, Mac, and Linux devices.

Drop us a note to learn more about why Google’s Identity Management isn’t a replacement to Active Directory. We’d be happy to share with you what we know about the cloud IAM market and how you may be able to build your identity management strategy.