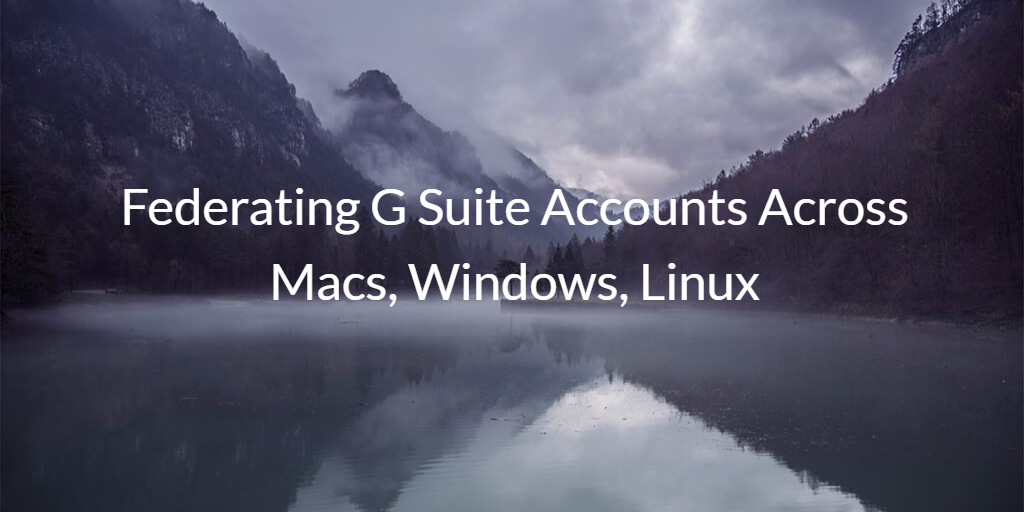 G Suite™ – formerly known as Google Apps for work – is in place at over 5 million businesses. It is one of the most popular and successful cloud platforms in history. Google has done an amazing job of competing with Microsoft.

A decade ago, very few people thought that anything could replace Microsoft® Exchange, or Office for that matter. One of Microsoft’s most profitable products was Office. And there was very little, if any, real competition. Google not only didn’t care about that, but they also turned the model for productivity solutions and backend IT infrastructure on its head.

Unfortunately, IT admins have not been able to replace the other half of the Microsoft Exchange / Active Directory® duo. As a result, federating G Suite accounts across Macs®, Windows®, and Linux® machines isn’t possible.

G Suite™ Alone is Not a Directory

In the early 2000s, Microsoft Active Directory and Exchange took hold along with the domain controller. A user would leverage one set of credentials to log into the network domain. Subsequently, they would have access to nearly all of the IT resources they needed, including their email, file server, Windows applications, and laptop. You could consider this a True Single Sign-On™ approach.

Unfortunately, however, it is impossible to federate access to systems, applications, and networks with just G Suite because it is a user management platform for G Suite and a few select web applications. Since G Suite identities aren’t exportable, it’s simply not possible to create a universal identity without Directory-as-a-Service.

The idea of federating G Suite credentials as the core user authentication identities has great appeal. In fact, if this was possible at the outset, it would have made the shift to the cloud more similar to how Microsoft solutions ran inside IT organizations.

Today, it is possible to make G Suite identities your core identities. It just can’t be done with Google alone. Instead, you need to pair G Suite with Directory-as-a-Service®.

IT organizations are effectively replacing both Active Directory and Exchange in their environment by integrating Directory-as-a-Service with G Suite. JumpCloud’s cloud identity management platform centralizes user identities. The cloud directory leverages a user’s G Suite identities as the core identity. It then federates that identity to their Mac, Windows, or Linux system; AWS® cloud servers; on-prem applications; web applications; and WiFi authentication. With Directory-as-a-Service, G Suite identities can be True Single Sign-On for an organization.

If you would like to learn more about how your G Suite credentials can be leveraged for your Mac, Linux, and Windows devices, drop us a note. You may also sign up for a free account to give our Identity-as-a-Service provider a try. Your first 10 users are free forever.