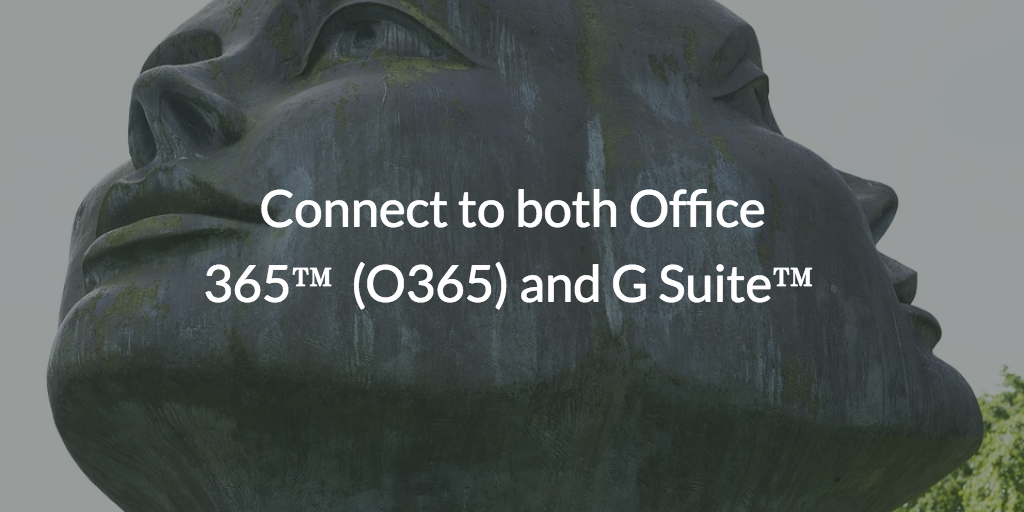 Microsoft Office™ is a staple at many organizations and has been for a long time. From schools to corporate boardrooms, the productivity software is a tool that is effective for a wide variety of uses. But, with IT’s shift to the cloud, on-prem Office just isn’t cutting it for some organizations. That’s because it’s expensive to purchase outright, and a lot of organizations are leveraging Mac® and Linux® machines. Office for Mac isn’t as robust a solution as it is on Windows®, and on-prem Office for Linux does not exist. So, some organizations have begun looking to the cloud. Google’s G Suite™ (formerly Google Apps) has been rising in popularity as the cloud productivity service of choice. Not to be outdone, Microsoft® released a cloud version of Office, dubbed Office 365™. Because some organizations may leverage both, IT admins often wonder if they can connect to both O365 and G Suite with one identity?

One Identity for Both Office 365 and G Suite

At first glance, this may seem like a ridiculous question. Why would one organization employ both productivity platforms when they do the same thing? For one, on-prem Office has been around for a long time and as a result has matured to include more robust features than G Suite. Excel™ is one example of an application that Google Sheets™ just can’t compete with at this time. On the other hand, when Microsoft did not provide a cloud solution, many organizations valued the document editing, email, meeting, and collaboration components delivered by G Suite. While G Suite is not generally viewed as a solution quite as powerful as Office, it does provide the basic functionality that many users require—at a lower price. When comparing price points, we see that for only $5 a month (soon increasing to $6) G Suite provides access to its entire productivity platform, while O365 only offers email and collaboration services—no word processing, spreadsheets, or presentation tools. That’s why some organizations may leverage G Suite for some departments and O365 in others.

Traditionally, many IT organizations leveraged Microsoft Active Directory® (AD) and Office on-prem. AD provided a simple way of managing user identities and allowing access to the Windows-based resources users needed. With the shift away from on-prem Microsoft software solutions like Exchange and Word to cloud-based productivity platforms like G Suite and O365 though, IT organizations wish their identity management would do the same. Given the competitive nature between Google™ and Microsoft, neither company felt compelled to federate identities to their rival service, until very recently, which we will address in the section below. Instead, each traditionally has attempted to lure users into their own walled garden through Google Cloud Identity™ and Azure Active Directory® respectively. What these solutions amount to is basically user management platforms for their services and web application single sign-on (SSO). In no way are these identity platforms a shot-for-shot replacement for on-prem AD.

Recently, Microsoft announced that they would begin integrating with Google…however there are limitations. First, it requires a yourname@gmail.com address to access Azure AD services. If you are using Gmail, but have a domain name other than “gmail,” you will not be able to use your email address to authenticate against Azure AD. This represents a problem for a lot of enterprise users. Further, you cannot create new Google IDs from Azure AD, you’d need to already have one. In addition, it doesn’t work the opposite way. You cannot use Azure AD IDs to access Google services. So, these two competing services still very much represent walled gardens.

With JumpCloud, you can authenticate and authorize against Azure AD with your Google ID, no matter the domain name. Also, you can create new Google identities straight from the JumpCloud user console. You can also create Google IDs via Google’s web services and utilize them in JumpCloud. Further, users can access their Google services with Azure credentials via a JumpCloud concept called True Single Sign-On™. It allows users to access all their IT resources, whether they’re from Microsoft, Google, Amazon, or any other competing company on-prem or off.

Given the fact that Azure Active Directory has the term AD in its name, it can be terribly confusing for IT admins and organizations who wish to shift to the cloud and leave on-prem AD costs and maintenance behind. For full directory functionality, on-prem infrastructure is still required because Azure AD cannot federate identities to legacy on-prem LDAP applications or wired and on-prem WiFi connections protected by RADIUS. Further, Azure identities can only federate to G Suite under on an extremely limited basis. With some users potentially having information on both services, IT organizations are left with a mess resulting from different identities, different services (O365, G Suite, and potentially many others) and no unifying directory service to manage them all. As a result, some organizations may go without a directory service, such as AD or LDAP, at all. So, some organizations are wondering how they can provide one user identity to login to both services. And, if there is such a solution, can it provide access to an even greater breadth of IT resources?

Connect to both O365 and G Suite

Luckily, there is a third party, neutral, platform-agnostic tool that IT admins can leverage to connect to both Office 365 and G Suite with a single identity. That tool is JumpCloud®  Directory-as-a-Service®, which can federate identities to virtually every IT resource an admin may want to connect a user to including: G Suite and O365, Google Cloud Platform™ and AWS®, Box™ and Dropbox™, Samba file servers and NAS appliances, and WiFi and wired networks via RADIUS. Being platform agnostic means that a singular identity can connect users to any of these resources regardless of the system they’re using, whether its Windows, Mac, or Linux®. Users win with a simplified work routine, meaning less password juggling, and IT admins win by saving money and time. Find out more about JumpCloud by signing up today; your first 10 users are free and will be forever. If you’re a visual learner, feel free to schedule a demo or check out our YouTube page.