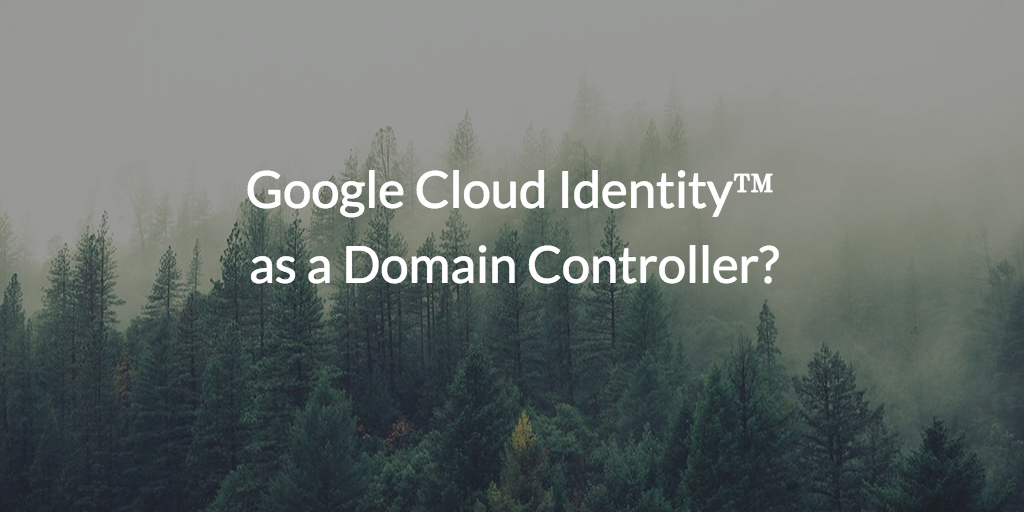 With the dramatic changes to modern IT networks and a continued shift to the cloud, IT organizations are trying to figure out what tools and solutions they can use to replace on-prem IT components. Google Cloud Identity™ has been considered by many as one such on-prem tool replacement. Due to this, many admins are asking: can you use Google Cloud Identity as a domain controller?

Google’s foray into enterprise solutions began over a decade ago, and G Suite™ (formerly Google Apps) was the wedge that they have used to work their way into the market. Previously, the IT world was completely dominated by Microsoft®, with Windows® solutions such as Exchange® for email, Office for productivity, File Server® for data storage, and more. Google approached the problem by offering IT organizations a completely different option. G Suite was a cloud-based service that obviated the need for on-prem hardware, software, and maintenance. For many, it offered an impactful, positive change, and for that reason, many smaller IT organizations have jumped on it. Over time, the same mindset shifted to a wide range of organizations, who decided there was no reason to have on-prem IT resources and began to switch to cloud-based solutions such as G Suite.

Despite their wide array of offerings, Google didn’t solve the problem for all IT management areas. One area in particular that was left unsolved was identity and access management (IAM). Microsoft had developed a strong directory services solution, called Active Directory®, which quickly became the standard in the industry. Google did not want to challenge AD as they had done to Exchange and Office, and left it largely untouched. The result was that Active Directory as a domain controller for an organization was left intact. This enabled users to login to their machines and gain access to on-prem Windows resources while using their web browser to access Google apps.

While they’ve never had the intention to compete with Active Directory, Google has made some plays in the IAM market that have made some start to wonder otherwise. Recently, Google introduced their identity management solution, Google Cloud Identity. Along with G Suite directory, Google Cloud Identity is meant to be a user store for Google Apps, as well as for a select few web applications via OAuth and SAML protocols. Interestingly, even with their new identity service, Google Cloud Identity still isn’t considered a replacement for the domain controller or Active Directory. That is simply not Google’s goal—they are far more interested in bringing IT organizations to the cloud and connecting those users to Google cloud resources. If IT organizations want their core identity provider to be AD, that’s fine with Google because they can leverage another on-prem server with GCDS (Google Cloud Directory Sync™) to connect on-prem to Google.

Of course, for IT admins, this isn’t the ultimate solution they are looking for. With their productivity platform shifting to the cloud, IT admins would ideally shift the domain controller to the cloud as well. For example, a centralized cloud identity provider that securely manages and connects users to the IT resources they need, including systems, applications, files, and networks regardless of platform, protocol, provider, and location would enable IT organizations to completely eliminate the need for on-prem infrastructure.

Beyond Google Cloud Identity as a Domain Controller

The good news is that there is such a platform available. It’s called JumpCloud® Directory-as-a-Service®, and it is effectively a replacement to Active Directory and the domain controller, while tightly integrating with Google services such as G Suite and Google Cloud Platform. By using JumpCloud Directory-as-a-Service, IT organizations can efficiently manage their user base, including identities, access rights, and more, all within one unified, cloud-based directory services solution.

To learn more about a cloud directory service that goes beyond Google Cloud Identity as a domain controller, contact our support team. Our experts can answer any questions or address any concerns you may have. You can also schedule a demo of JumpCloud Directory-as-a-Service to see the solution in the hands of an expert, or try it for yourself for free for up to ten users.