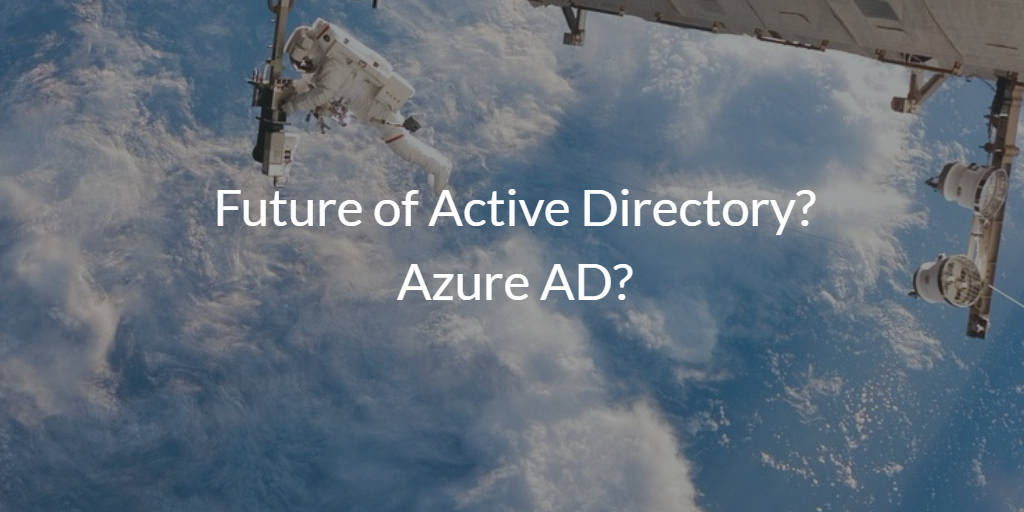 The IT world is Evolving.

As a result, many admins are wondering what the future of Active Directory looks like, and if Azure will play a part.

Microsoft is enjoying a resurgence under their new CEO. They had lost their way for a long time, and it appears that they have started to find it again, with the recent rise in competitiveness in a number of markets. While many areas have changed, many are staying the same. How are IT admins to judge where the juggernaut will take various products and markets? One particular area of interest that we get asked about regularly is what the future of Active Directory® will be. Will Azure Active Directory® be a replacement to Active Directory?

A recent thread on Spiceworks provides great insight into Microsoft’s thinking around Active Directory, and what it’s relationship with Azure AD is. From this thread, we can see that the on-prem and cloud Active Directory versions are separate code bases and also created in different groups. Their visions are different and while they can be integrated together, their goals are dramatically different.

Of course, like any other behemoth, Microsoft is paying attention to their largest customers and modeling their products after those environments. If you aren’t one of Microsoft’s largest customers, you are just along for the ride. They are going to try to drive your network decisions to be most beneficial to them. If you aren’t interested in using their Azure cloud platform or Office 365, you are going to be out of luck. If you are interested in mixing platforms between Microsoft and others, their Active Directory solutions will steer you away from that.

The on-prem Active Directory has been a critical component to Microsoft’s dominance in the desktop marketplace. AD made it easy to manage and control Windows devices and users. IT admins also gained more control if they used Windows. With the concept of the domain controller, Windows applications were easier for users to log in to than others as well. It is clear to see that Active Directory has been a central component to controlling the Windows and Office franchises.

Microsoft Forced to the Cloud

However, with the Office solution under pressure from G Suite (formerly known as Google Apps), Microsoft was forced to shift the platform to the cloud. End users could pick whether they wanted to use a cloud Office service or if they wanted to leverage the traditional on-device software. Either way, Microsoft didn’t want to lose control over user access and management. They created Azure AD as a way to enable Office 365 user management as well as their cloud platform, Azure.

But the catch for IT organizations was that they still needed Active Directory on-prem to feed the cloud AD version:  on-prem AD to control on-prem resources, Azure AD to control Azure resources.

Of course, if you are using non-Windows or Microsoft resources, you are at a disadvantage with any of the AD platforms because of the lack of support for any non-Microsoft products. Seeing this structure, it is clear that there is little reason for Microsoft to change their views of where AD will go, because some of the change would be a downside to them. AD is a central control point for Microsoft with their customers. Removing AD would cause them to lose that control.

The Future of Active Directory and You

If you would like to learn more about the future of Active Directory, and whether Azure AD is that, or a new cloud IAM solution called Directory-as-a-Service can fit the bill, drop us a note. Alternatively, put our IDaaS platform side-by-side with Active Directory or Azure AD to get a better sense of what you can and can’t do with each platform. We think you’ll be pleasantly surprised by what you can do with a neutral cloud directory service. Sign-up for a free account today and your first 10 users are free forever.