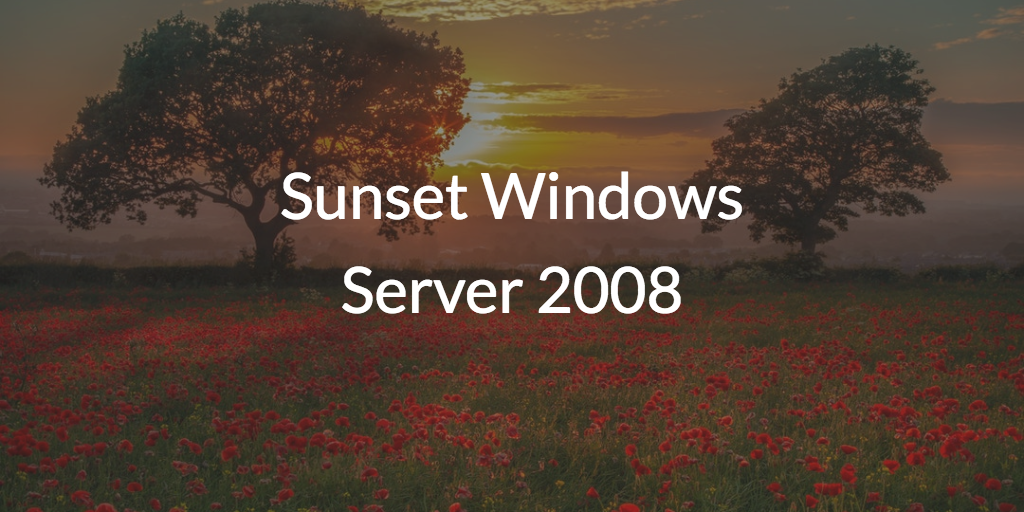 IT admins are starting to wonder what they will do when Microsoft® sunsets Windows® Server 2008. Server 2008 had a pretty long run, debuting in 2008 and entering its sunsetting phase right now. Unfortunately for IT admins though, that long run is coming to a close quickly, and they’ll need to have a plan in place in order to to maintain compliance, security, and access.

Many IT admins that have been using Windows Server 2008 aren’t motivated to upgrade to newer Windows Server models (Server 2012 or Server 2016) because it can result in some pretty substantial upgrade processes and costs. It’s also a lot of work. Plus, some admins may need to purchase and implement entirely new servers, while others are reluctant because they may need to buy new versions of their existing software applications. Plus, continuing to upgrade ties you to Microsoft, so you’ll continually need to pay them. All that said, one thing is certain—all IT admins wish the process were simpler.

Active Directory® and the Domain Controller

As a result, many IT organizations are loath to change their identity management approach because it is so critical. So, many IT admins are wondering just how long it’s possible to stay on Server 2008. Unfortunately for them Microsoft is ending support for Server 2008 on January 14, 2020. That is not much time. Also, new Server products entering the market in 2019 inflict additional costs that some IT admins aren’t used to. These costs stem from Server 2016’s pricing based on number of CPU cores rather than socketed CPUs. This pricing strategy makes sense for Microsoft when you consider core counts are rumored to continue rising.

The major challenge with this approach is that Windows Server 2008 becomes an anchor to lift in the shift to the cloud. On-prem implementations fly in the face of modern approaches to IT. With a wide range of tools available from the cloud, on-prem hardware seems counterintuitive. There have been such tremendous advances in security, integration, and support of non-Windows platforms that staying on Server 2008 would likely be far more expensive than shifting to modern alternatives to Active Directory and the domain controller.

We understand that Active Directory Domain Services represent probably the biggest reason admins wish to continue to use Windows Server 2008. But, with JumpCloud Directory-as-a-Service, you won’t be missing out on key aspects of Server 2008 functionality by switching to our cloud-based directory services. JumpCloud fills the need of Active Directory Domain Services by leveraging LDAP as one of its directory services protocol as well as tight, native integration with Windows, macOS, and Linux systems. So, you’ll still have a source of truth for IT resources except you’ll now be able to go cross platform much easier. No harm, no foul. Further, with JumpCloud® Policies, you won’t miss out on the ability to control systems for particular groups of users either.

As you probably know, Windows Server 2008 fulfills more roles than just Active Directory Domain Services, some of which you may be concerned about losing when Microsoft stops supporting Server 2008. One such feature may be Active Directory Federation Services (ADFS). This feature enables secure access to applications that lie outside of the user’s domain. These applications are typically web services that JumpCloud’s SAML connectors can federate access to, albeit with no sunsetting to worry about.

Another major feature that users may be afraid of losing is Network Policy Access Services. This feature provides users with local and remote network access, and it also allows admins to centrally manage network access and control policies. JumpCloud has the ability to manage that as well, thanks to the RADIUS protocol. RADIUS-as-a-Service allows users to leverage their own unique set of credentials to log in to network resources as well as managing who is allowed to access what network. Switching to the cloud isn’t as scary as it used to be.

The best modern alternative to an on-prem Windows setup is JumpCloud Directory-as-a-Service®. As a cloud-forward solution, JumpCloud is made for all the cloud-based resources that users in your IT environment utilize while also connecting users to on-prem resources as well. It securely manages and connects your users to their systems (Windows, Mac®, Linux®), applications (web or on-prem), files (NAS devices, Samba file servers, cloud storage solutions like Box™), and networks regardless of location.

If you’re ready to sunset Windows Server 2008 permanently and utilize a solution much more flexible and in tune with the modern reality of the IT environment, please give us a shout. If you’re ready to get your hands dirty, sign up for a free account today. It allows you to manage 10 users free, forever. Additionally, be sure to visit our YouTube channel for helpful tutorials, best practices, and informative whiteboard videos.