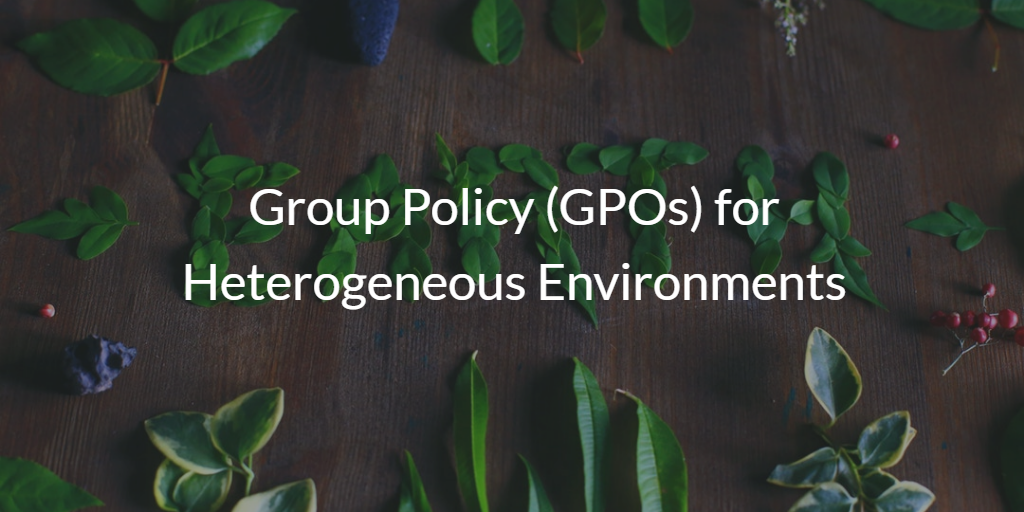 Is Group Policy (GPOs) for heterogeneous environments a potential solution for IT admins? It’s a great question, but unfortunately the answer is no. GPOs are a Microsoft® Windows® centric construct. They were not built for Mac® or Linux® systems, and they cannot reach those platforms without help from 3rd party tools. That being said, this doesn’t mean that the premise of having control over heterogeneous environments is impossible. There are alternatives to GPOs that accomplish the same effective goal – comprehensive system management.

We should probably back up to give some context. If you don’t know what GPOs are, they are a collection of settings that define what a system will look like and how it will behave for a defined group of users (TechTarget). These collections of settings are preconfigured into templates of policies, which can then be run against your fleet of Windows machines. The policies can serve a number of purposes, but most commonly you will see them implemented as security tasks like password complexity settings, screen saver lock, and disabling guest accounts. Other common usages of GPOs include remote management tasks or settings that IT admins want to enforce on their Windows fleet.

The idea behind Group Policy was simple, but powerful. Microsoft wanted to give IT admins remote control over their systems. In order to do this, Microsoft embedded this concept of system management within their identity provider, Active Directory® (AD). In doing so, Microsoft created a central directory that allowed admins to control access to the on-prem applications and systems of the early 2000s. This turned out to be a brilliant move, as it helped AD to become the on-prem leader in directory services.

Over the years, though, Active Directory has started to lose steam.

GPOs Were Built for Outdated IT

With major cloud transformations underway, and the shift to web applications in full swing, Active Directory has struggled to keep up. AD now manages much less of an organization’s IT infrastructure. If you add in the massive movement to Mac and Linux systems, it becomes clear that Microsoft’s core directory service is no longer connecting users to all of their IT resources like it once was.

When it comes to wanting GPOs for heterogeneous environments, the biggest wrench in this plan is that Active Directory struggles with the management of Mac and Linux systems. GPOs may work incredibly well for Windows machines, but unfortunately for Mac and Linux systems, IT admins need to search for a different approach. The concept of Group Policy for heterogeneous environments doesn’t really exist from Microsoft. Does an outside solution for cross-platform GPOs exist though?

A New Approach to GPOs

As a matter of fact, there is another approach. Many modern IT organizations are shifting to a new cloud directory that offers the GPO alternative they are looking for. This Group Policy-like solution works for heterogeneous environments, meaning that your Windows, Mac, and Linux devices are all covered. With Policies that can be enforced over all three platforms, and Commands that allow custom scripts to be run against the machines as well, it is essentially the Group Policy for heterogeneous environments that IT admins are searching for. Called JumpCloud Directory-as-a-Service® (DaaS), the cloud-based directory integrates cross platform user management capabilities with system management. IT admins can now not only manage their Windows, Mac, and Linux systems, but the users on these machines as well.

Beyond the ability to manage systems and users, this cloud identity management platform also connects users to their applications. Regardless of if the user is accessing web or on-prem applications, cloud or on-prem files, and wired or WiFi networks, they can easily access the applications they need with one centralized identity. In short, Directory-as-a-Service is the reimagination of Active Directory for the cloud era.

Sound interesting? Then check it out for yourself! JumpCloud Directory-as-a-Service offers free accounts with 10 users that can be used forever, meaning you get a perfect environment to test the platform out. You can test the Policies and Commands feature, and see how the centralized cloud directory is able to bring a user frictionless access to all of their IT resources from one platform. Alternatively, you can also sign up for a demo of the JumpCloud DaaS platform so you can see the directory in action and ask questions of the presenters live. Look into the directory built for modern IT today!

Want to get in touch? You can contact us here.